EGD Glass has received an Award of Merit in the William Greer Architectural Conservation and Craftsmanship category in the 41st Heritage Toronto Award ceremony held on October 13, 2015.

The William Greer Architectural Conservation and Craftsmanship awards recognize owners who have undertaken projects to restore or adapt buildings or structures that have been in existence for 40 years or more, or are included on the City of Toronto’s Inventory of Heritage Properties.

The Toronto Bell Cote is the only wood framed church in Toronto and possesses a rich local history. The building was on the verge of collapse in 2010 when renovations began to restore and preserve it. EGD Glass was called upon to restore the damaged stained glass windows.

The team completed the renovation, which also included a new foundation and basement, steel framing and wood restoration through out, in 2014.

Originally built in 1895, the Toronto Bell Cote was once known as Holy Trinity Anglican Church, located in Malton, ON. After falling into disuse, the building was relocated to it’s current site in 1923 and renamed St. Matthias Anglican Church. The congregation of St. Matthias relocated in 1957 and the building was later designated a heritage site by the City of Toronto in 2003.

Celebrate the 120th anniversary of the Toronto Bell Cote, a local heritage site, on Sunday, October 18 from 12 p.m. to 3 p.m. An event will be held on site at 691 Scarlett Rd., at the corner of Scarlett Road and Kingdom Street.

The event will be marked with activities every hour, on the hour beginning at 12 p.m., including a talk on the history of the building, a presentation detailing the renovation process, and a display of artefacts that trace the building’s history.

Renovations began in 2010 to restore and preserve the deteriorated building. EGD Glass was called upon to restore the damaged stained glass windows. 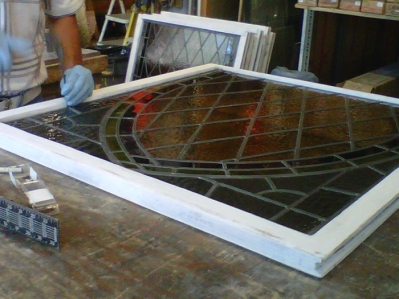 After assessing the condition of the stained glass, EGD Glass followed up with the conservation of eight original sash windows. Each panel was dismantled and releaded and some pieces of the painted glass, damaged beyond repair, were replicated. The tryptich window on the east side, which featured three panels, was restored. On the south side, a small Gothic window was restored and moved higher up the wall.

EGD Glass also recommended a secondary glazing to protect the newly restored windows. A traditional wood storm glazing was chosen for being in keeping with the style of the day and meeting the Heritage Toronto Board’s requirements.

Under the guidance of Takashi Tsuji Architects, the entire restoration, which finished in 2014, also included a new foundation and basement, steel framing and wood restoration through out. 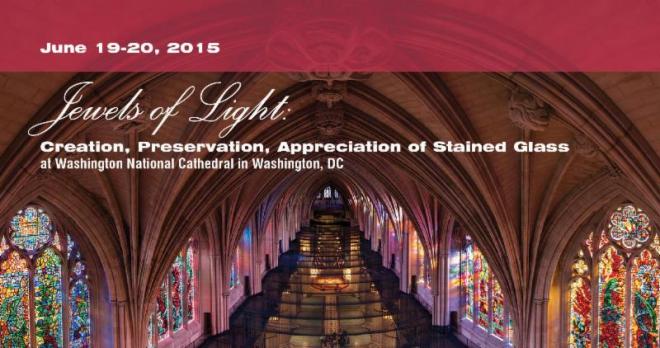 EGD Glass will be presenting at Jewels of Light: Creation, Preservation, Appreciation of Stained Glass. The stained glass symposium is being presented by the Association for Preservation Technology and will discuss primary conservation problems encountered when restoring historic stained glass windows.

The symposium will bring together stained glass designers, design and engineering professionals, preservation specialists, and stained glass fabricators. It’s purpose is to educate, inform and encourage collaborative discussions about the creation, reservation and appreciation of stained glass.

Join us from June 19 to 20, 2015 at the Washington National Cathedral in Washington, DC.

During the spring of 2014 a team from EGD Glass is working to install the north windows at Holy Trinity Russian Orthodox Church in Toronto. An ongoing restoration of all of the stained glass windows in the church is in process. Stay tuned for more information about the completed restoration.

Panel before repair by EGD

As a final note to the restoration of the Macaulay Museum Church in Picton, the stained glass window in the vestibule was reinstated in August 2013.

The original panel was reportedly removed from a local church in Picton and installed in the vestibule, both the date and story have yet to be verified.

Panel after repair by EGD

The panel was in poor condition when EGD carried out the stained glass survey in 2010.

The restoration of the panel was not included in the 2010 – 11 refurbishment program. The ‘Friends of Macaulay Heritage Park’ volunteers took it upon themselves to find the funds to restore the window.

The restoration included maintaining as much of the original glass as possible, replicating the filigree stencilled pattern and acknowledging the key supporters of the restoration program. 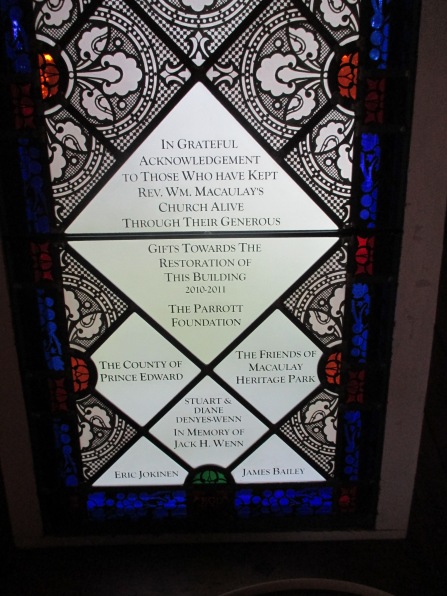 These stained glass window depicting the life of Jesus were designed for St. George Anglican Church, East Toronto. The windows were designed and fabricated in Toronto by a local glass artist and are approximately 40 years old, they are painted and fired in the traditional technique. The church was closed in 2011.

This example shows you a full length view of the window in place. This the 11 panel type which is the bulk of this lot except the nativity ( a nine panel set) and the smaller saints group of two windows.

Look at all the windows in Lot 177 by following this link:

A wonderful project we worked on with joint venture Canadian Architects PKG has been listed as a winner the 2011 OAA, Ontario Architects Association, Awards.

The prestigious offices of PKG  and KPMB, completed the massive overhaul on Ottawa’s, Canadian Museum of Nature.

PKG was responsible for the heritage side of the project which consisted of restoring the nearly 100-year-old building.

EGD was brought on as the heritage window specialists and worked on the projects on an ongoing basis from initial phase through to the final phase.

We are incredibly pleased to have been included in the consulting team and are delighted to hear of PKG’s win.

Possibly  inspired by the film ‘The Fifth Element’, the apartment bears a similar futuristic feel of Bruce Willis’s Character Corbin Dallas’s apartment in the film.

Whatever his inspiration we love his innovative approach to creating space while maintaining a harmonious design.

We especially liked the warm yellow hue used in the 3 long glass windows which make it seem like the sun is always shinning.  A great example of how a few windows with tinted glass can change the look and feel of any room.