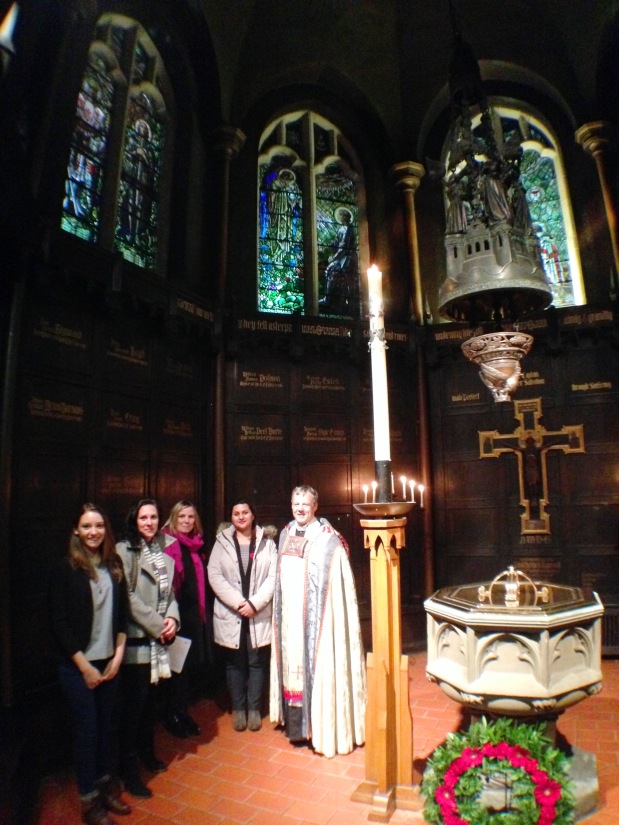 The Award of Excellence in the Materials, Craftsmanship and Construction category, was awarded to the EGD glazing team along with St.Thomas’s Anglican Church. For the conservation of the stained glass windows in the Baptistery.

Many thanks to all the team.

EGD Glass wishes you a joyous holiday season and best wishes for 2018.

To mark the holiday season, EGD Glass is making a financial contribution to three organizations in need of support this year – Doctors Without Borders, the Yonge Street Mission and Sistering.

The image featured in this Christmas card is a detail from the great east window at Knox Presbyterian Church, Toronto. The restoration of the windows began with the removal in January of this year and the installation was completed in November 2017.

The windows were designed and fabricated by N.T.LYONS of Toronto and installed circa 1906.

EGD Glass has recieved an Award of Merit in the category of Conservation: Materials, Craftsmanship and Construction from the Canadian Association of Heritage Professionals.

The renovations began in 2014. A condition survey revealed the stained glass windows were in poor condition. A lack of protective glazing meant the windows had been exposed to the elements over the years. EGD Glass was contracted to provide a full conservation treatment.

EGD Glass removed the windows from their openings before taking rubbings and thorough documentation. The windows were dismantled in our Toronto studio and reconstructed using best practice of conservation principles. The restored windows were reinstalled in their original openings in 2015.

The restoration was covered by the Toronto Star in 2014.

EGD Glass is pleased to welcome you to our new website! We have worked to develop a new, mobile-friendly website to better serve the needs of our clients.

The new site will allow you to learn more about our company, our services and how we can work with you to achieve your goals. EGD Glass proudly offer our clients an individually tailored service throughout all stages of planning, design, fabrication and installation, depending on what your needs may be.

Visit the new EGD Glass Shop to browse our selection of reclaimed stained glass windows. Do you see something you like? Use our built in request a price feature to find out the cost of one or more reclaimed windows.

What do you think of our new site? Let us know in the comments below or send us an email. 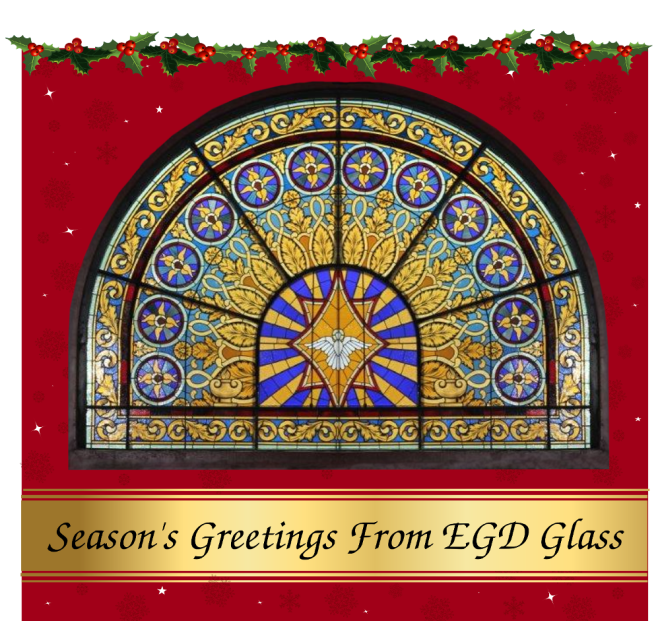 EGD Glass wishes you a joyous holiday season and best wishes for 2016.

The window featured in this holiday card can be found at the Church of the Holy Trinity, Russian Orthodox Cathedral, on Henry street in Toronto. This window was restored by EGD Glass in 2014.

EGD Glass has received an Award of Merit in the William Greer Architectural Conservation and Craftsmanship category in the 41st Heritage Toronto Award ceremony held on October 13, 2015.

The William Greer Architectural Conservation and Craftsmanship awards recognize owners who have undertaken projects to restore or adapt buildings or structures that have been in existence for 40 years or more, or are included on the City of Toronto’s Inventory of Heritage Properties.

The Toronto Bell Cote is the only wood framed church in Toronto and possesses a rich local history. The building was on the verge of collapse in 2010 when renovations began to restore and preserve it. EGD Glass was called upon to restore the damaged stained glass windows.

The team completed the renovation, which also included a new foundation and basement, steel framing and wood restoration through out, in 2014.

Originally built in 1895, the Toronto Bell Cote was once known as Holy Trinity Anglican Church, located in Malton, ON. After falling into disuse, the building was relocated to it’s current site in 1923 and renamed St. Matthias Anglican Church. The congregation of St. Matthias relocated in 1957 and the building was later designated a heritage site by the City of Toronto in 2003.

EGD Glass will be presenting at Jewels of Light: Creation, Preservation, Appreciation of Stained Glass. The stained glass symposium is being presented by the Association for Preservation Technology and will discuss primary conservation problems encountered when restoring historic stained glass windows.

The symposium will bring together stained glass designers, design and engineering professionals, preservation specialists, and stained glass fabricators. It’s purpose is to educate, inform and encourage collaborative discussions about the creation, reservation and appreciation of stained glass.

Join us from June 19 to 20, 2015 at the Washington National Cathedral in Washington, DC.

To mark the holiday season, EGD Glass is making a financial contribution to two organizations in need of support this year – Doctors Without Borders and Sistering.

The windows featured in this Christmas card can be viewed in the Chapel at St. Michael’s Hospital in Toronto. The windows were designed and installed by Yvonne Williams and Esther Johnson in 1937. EGD Glass is currently working to restore the windows.

Panel before repair by EGD

As a final note to the restoration of the Macaulay Museum Church in Picton, the stained glass window in the vestibule was reinstated in August 2013.

The original panel was reportedly removed from a local church in Picton and installed in the vestibule, both the date and story have yet to be verified.

Panel after repair by EGD

The panel was in poor condition when EGD carried out the stained glass survey in 2010.

The restoration of the panel was not included in the 2010 – 11 refurbishment program. The ‘Friends of Macaulay Heritage Park’ volunteers took it upon themselves to find the funds to restore the window.

The restoration included maintaining as much of the original glass as possible, replicating the filigree stencilled pattern and acknowledging the key supporters of the restoration program.

These stained glass window depicting the life of Jesus were designed for St. George Anglican Church, East Toronto. The windows were designed and fabricated in Toronto by a local glass artist and are approximately 40 years old, they are painted and fired in the traditional technique. The church was closed in 2011.

This example shows you a full length view of the window in place. This the 11 panel type which is the bulk of this lot except the nativity ( a nine panel set) and the smaller saints group of two windows.

Look at all the windows in Lot 177 by following this link: 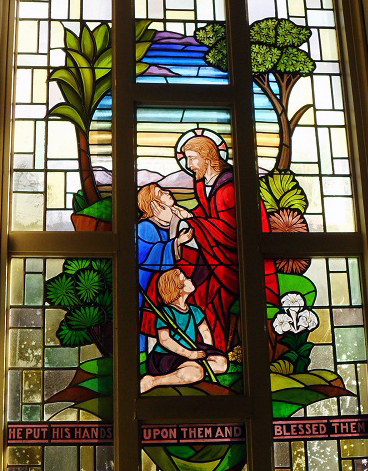